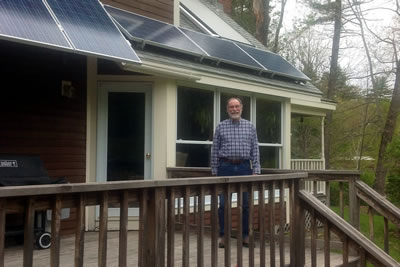 John Kondos outside H-ER officeHome-Efficiency Resources pursues effective, efficient and equitable solutions to reduce greenhouse gasses and our dependence on fossil fuels. H-ER supports the implementation of sustainability across a company from decarbonization to building resilience.

Home-Efficiency Resources, LLC (H-ER) was founded in 2006 to provide energy audits and solar system installations in the Monadnock region of New Hampshire. H-ER founder, John Kondos, started his career in the solar energy industry in the late 1970’s after discovering ‘free fuel’ while pursuing his Master’s degree in Arizona.  He began at the contractor level and went on to work at a crystalline, followed by a thin-film photovoltaic (PV) manufacturer.

John has worked in a variety of industries practicing continuous improvement to optimize productivity, profitability and competitiveness. Much of his career has been with manufacturing firms with a focus on product and market development. He learned and pursued continuous improvement strategies with an emphasis on cost-effective product and productivity advances.  He returned to the solar industry after founding Home-Efficiency Resources. He has installed PV systems on three continents and solar thermal systems in three states. He has been harvesting solar energy since 1975.

He spent the last decade researching and working as a volunteer on Climate Crisis solutions. In January, 2008, John was part of a group of local business people who met to discuss how to promote sustainability in the Monadnock region. From this grew the Monadnock Sustainability Network (MSN). John led MSN’s Community Supported Solar (CSS) initiative which relied on a locally owned LLC that developed and owns the solar (PV) project and sells electricity to the host. He wrote the New Hampshire Community Supported Solar (NHCSS) Guide, published by MSN, based on over two years of work to complete a locally owned 43 kW PV system on the Monadnock Food Co-op in 2016.  A collaboration with the Cheshire County Conservation District yielded a 90 kW group net-metered CSS project for farmers which came online in Rindge, NH in 2020.

In January 2018 John was part of another group of citizens who met to focus on reducing greenhouse gases (GHGs) in the region. They supported local energy committees, “Solarize” campaigns. and clean transportation. John has led the electric vehicle (EV) initiatives including hosting at least one Drive E event a year, the development of the first public fast-charging station in the Monadnock region at the Monadnock Food Co-op and the E police car initiative.

In January 2020 these groups merged forming the Monadnock Sustainability Hub (MSH) to strengthen the sustainability and resilience of the region by working collaboratively to reach 100% clean energy.  John served as president for nine years until 2020. He is a co-founder of the first NH chapter of Citizens Climate Lobby and a trained En-ROADS climate solutions simulation Ambassador.

In addition to numerous courses and workshops, John has an MBA in International Management from the Thunderbird School of International Management and a BA from Fairfield University. He is committed to working on solutions to our greatest challenge and opportunity - climate change; through energy efficiency, renewable energy and effective policies.